Dennis, a special education teacher, and Sharon, a music teacher, started Added Touch together... somewhat on accident. After seeing a silk floral arrangement that Dennis had recently crafted, Sharon's cousin asked Dennis if he would do her wedding flowers. Hesitantly Dennis agreed to do the wedding flowers, and Sharon played the organ for her cousin's wedding.

After the wedding Dennis decided to enroll in a floral design class at Eastern Kentucky University in the fall of 1985. Dennis told Sharon he was going to open a business. Sharon laughed and said, "Yea right!" Soon Dennis started altering the apartment of an old house they had rented out in downtown Richmond, KY. Together they bought one pair of candelabra, found a round oak wood table in Sharon's parent's shed, and Dennis started making silk flower arrangements. Their first "OPEN" sign was set out front on their first day of business in the middle of March, 1986. After opening, Dennis and Sharon gained more and more clients. Sharon was a reluctant business partner but stepped up to help Dennis as business grew.

On June 12, 1996, Sharon's life was turned upside down when Dennis was tragically killed in a car crash. Sharon's first instinct was to close the shop since it was never her idea to have a business. In the process of discounting merchandise and clearing out the shop to close, Sharon met a soon-to-be bride who was in tears. The bride shared that her mother and 2 sisters were recently killed in a car accident and asked Sharon if she could help with her wedding. At first Sharon was angry. Through clenched teeth Sharon invited the girl to sit down in the shop and agreed to help her with her wedding. Through the process, Sharon changed her mind about closing the shop.

In 2001 Sharon remarried a wonderful man, had relocated the shop, and needed to hire additional help for the growing business. Sharon crossed paths with Lee, someone who knew very little about weddings but was eager to learn! After Lee was hired by Added Touch to assist with weddings, she decided to enroll in a floral design class to learn more about wedding flowers. The class at EKU was taught by the same professor that Dennis had several years earlier. Soon, Lee became the floral designer for Added Touch!

Needing more help, Sharon noticed a “natural talent” in Bryan and invited him to come work for Added Touch. At the time, Bryan was studying interior design at Eastern Kentucky University. While at EKU Bryan took an elective floral design class which was also taught by the very same professor that Dennis and Lee had both learned from. Bryan began working for the Added Touch and quickly learned how much he loved working with weddings!

After being in business for 30 years, while also being a full time music teacher, Sharon decided that it was time to retire, and to pass the torch of Added Touch to new owners. At this point, Lee had worked with Added Touch about 11 years, and Bryan had worked about 9 years. Together Lee and Bryan purchased Added Touch in January, 2016.
Lee and Bryan’s skills compliment each other well. They have worked hard to keep up and to grow the legacy that Dennis and Sharon started in 1986.

Lee Pence is married to her loving husband, and they have three beautiful children. Lee is active in her church, Boy Scotts, and enjoys sewing and working on crafting projects (in what little downtime she may have). In between homeschooling her children, Lee and her family enjoy cheering on their Auburn Tigers. War Eagle!

​Bryan Kidd graduated from Eastern Kentucky University with a degree in interior design and went to school in Atlanta to gain his M.Div. from McAfee School of Theology. Bryan enjoys traveling with his boyfriend, Austin, obsessing over Dolly Parton, and playing on his parent’s farm in Paint Lick, KY. 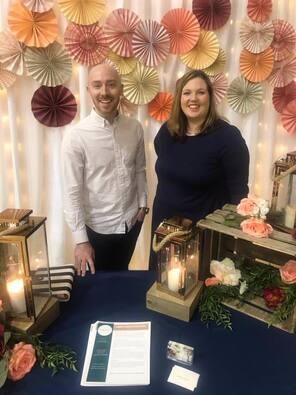